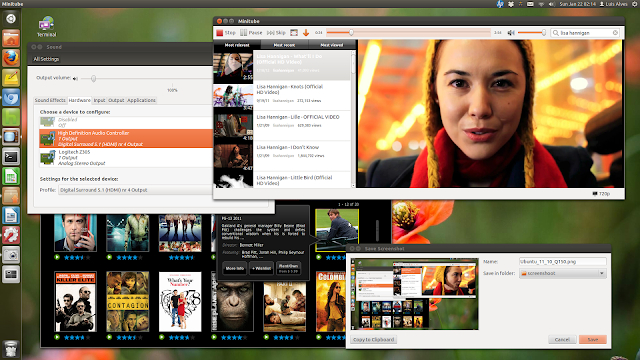 I decided to install the 64 bit version of Ubuntu. I also installed:

# Install the nvidia drivers to be able to start xbmc, the open source drivers won't work. You can do that by going to "System Settings" and run the "Additional drivers" app on Ubuntu followed by a reboot. After this install xmbc

You can get all the other applications from Ubuntu Tweak or Ubuntu Software Center.
The latest version of Ubuntu contains updates to the kernel, alsa and nouveau nvidia drivers.

- The new opensource video drivers seems as fast as the proprietary drivers when playing video and this is great, but flash is a little bit faster with the nvidia drivers.
- It also detects the nvidia HDMI sound card and sound works out of the box.
- Basic installation from a USB key works fine.
- HDMI/VGA and sound out, little USB keyboard/mouse works fine.
- Dual boot with Windows 7 works fine. But since I got a SSD installed on the Q150, I removed windows.
- Video acceleration at 1080p works great for Miro, mplayer, minitube, vlc, xmbc with the opensource drivers. Sound works out of the box for xmbc, with default settings.
- Wireless card works out of the box as well as the Ethernet drivers. In the Ubuntu 10.10 and 10.04, I had some problems to get the Ethernet driver to work without a cold reboot, but now it seems to work flawless.


- Flash video acceleration does not work as fast as in windows, it uses more CPU, I think this is because flash on linux does not have gfx acceleration.
- With the the nvidia opensource drivers Ubuntu sometimes freezes, this normally happens when using Unity or playing Videos. I assume this is related with 3d or video acceleration stuff since using just the browser does not seem to create problems. You need to reboot Q150 if this happens. With video nvidia drivers seems to be stable. I'm currently using the nvidia drivers.

Wake up from usb wireless keyboard

You need to enabled USB wake up, in /proc/acpi/wakeup

This will allow you to suspend the machine use the wireless usb keyboard to wake up.

Wake up from at certain time

How to use sound over HDMI

If you install nvidia drivers sound should work out of the box for HDMI, the open source drivers don't support sound over hdmi. After installing the nvidia drivers and a reboot, just go to sound Preferences and select Hardware->"High Definition Audio Controller" to "Digital Stereo (HDMI) nr 4 Output", and disable the other sound devices. In my case I had to play with that setting, it looks like only one setting works for me: "Digital Stereo (HDMI) nr 4 Output". None of the others produce a sound. This was done using Ubuntu 11.10.